In this section we discuss the environmental ‘cost’ of solar panels and approach the topic of their carbon payback period.

This section can be categorised under many headings: Energy Amortisation, Life Cycle Assessment (LCA), Carbon Cost Payback and Energy Payback Period. All will be relevant in some form or another but for simplicity we will use the abbreviation LCA in this document.

There have been many studies in many forms that have been undertaken in regards to analysis of the LCA of solar photovoltaic panels. All concluding that Solar Panels do in fact pay for themselves in a relatively short period of time, both in carbon reductions, embodied energy and electricity, all redeemed well within their operational lifecycle. As the volume of PV units manufactured increases, the carbon cost of their production goes down, ever decreasing this carbon and energy ‘payback’ period.

An example of how a solar panel would pay back its energy and carbon production cost extremely quickly, would be a French or German made panel (being manufactured with electricity generated from Nuclear power – low carbon) being installed in China, where the vast majority of energy is generated via coal or gas, which is high carbon. This would offset the carbon and energy cost taken to manufacture the panel initially, in a very short period of time. The opposite applies when a China made unit is installed in France. 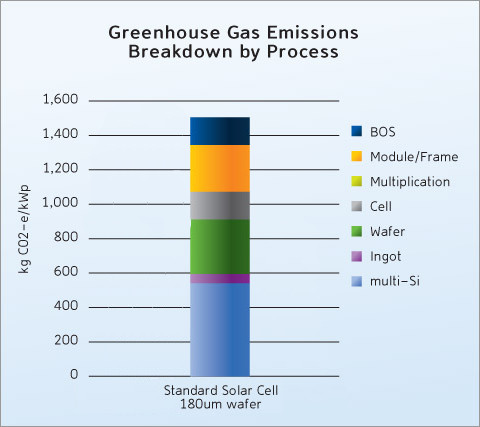 A typical solar panel will save over 900kg of CO2 per year that results in a carbon payback period of ~ 1.6 years.

As solar panels have an expected life of 25 years, even in areas where the sun’s radiation is received at less than 550kWh per m2 such as the northern UK, a typical solar panel takes around 6 years to pay back its energy cost.

On a larger scale a study by Stanford University illustrated that the global PV industry is poised to pay off its energy debt between 2015 and 2020, resulting in a net energy benefit to society. This figure is largely due to the continued reduction of energy required to install and manufacture the solar PV systems themselves. 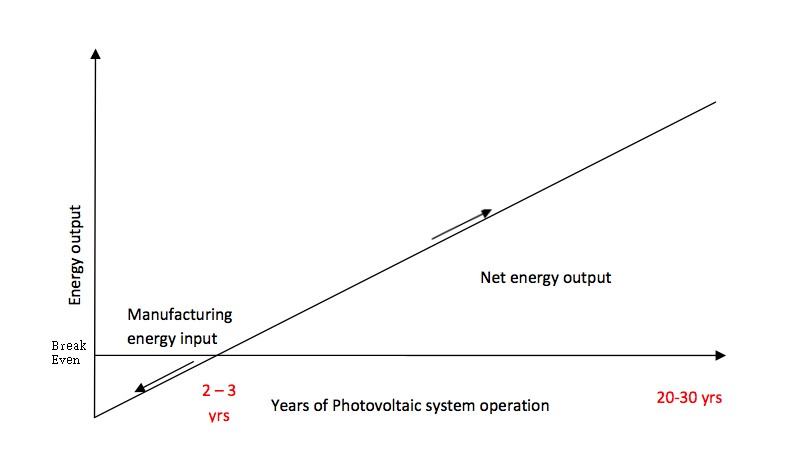 As mentioned earlier solar panels have been proven to pay for themselves in regards to the carbon and energy used and released during their creation. What is often overlooked is the other positive effects that their existence and continued usage has on the world around us.

The primary benefit to our planet is that they steadily reduce our reliance on mainstream Industrial power generation. When fossil fuels are burned both particulate matter, carbon dioxide (and if the combustion process is inefficient, carbon monoxide) is released into the atmosphere. Many fossil fuel power stations have methods to try and curtail these by-products, but these systems only reduce the resultant emissions marginally.

Although nuclear power generation is often seen as a ‘Green Energy’ many would argue otherwise. Nuclear power generation creates large amounts of highly toxic waste during its operation, which takes an enormous amount of time to degrade to acceptable levels, so as a result the large volumes of radioactive waste have to be stored somewhere safely. Other than the disposal and recycling of the materials contained in solar panels there is no harmful waste produced during their operation.

“Compared with electricity from coal, PV electricity over its lifetime uses 86 to 89% less water, occupies or transforms over 80% less land, presents approximately 95% lower toxicity to humans, contributes 92 to 97% less to acid rain, and 97 to 98% less to marine eutrophication.”

Carol Olson, researcher at the Energy Research Centre in the Netherlands

Earlier this year enough capacity was generated by solar photovoltaic panels across the globe to power over 30 million households. That’s a saving of more than 53 million tons of carbon dioxide annually, proof that the expanding industry is helping combat global warming and helping to reduce our negative effect on our environment.