Solar energy has been used in various ways since the 7th century BC. The history of solar energy is an interesting story. The sun’s rays were amplified and used to create fire. In the third century B.C. the Greeks and Romans used ‘burning mirrors’ to light torches for religious purposes. It has been said that in the 2nd century B.C. Archimedes used the reflective properties of brass to set fire to Roman ships attacking Syracuse. By the 6th century A.D. sunrooms on houses became popular. Justinian Code initiated ‘sun rights’ to ensure individual access to the sun.

Early uses of the sun’s energy focused on heat and passive solar design. This covered everything from where to position your doors and windows, to warming items that hold their heat through the night. This was to ensure buildings gained the most heat. Click here for an example and information on an indirect gain trombe wall design that uses passive solar.

The world’s first ‘solar collector cell’ was designed and constructed in 1767.  Swiss scientist Horace-Benedict de Saussure (right) made the discovery when heat power, mainly steam, was tested. He constructed an insulated box with an opening and three layers of glass. This glass magnified the sun’s heat to temperatures in excess of 230 degrees Fahrenheit and was used in a variety of ways.

In 1839 we encountered a major milestone in the evolution of solar energy: the defining of the photovoltaic effect. At the age of 19, a young French scientist by the name of Edmund Bacquerel discovered the photovoltaic effect whilst doing research in his father’s lab with an electrolytic cell made up of two metal electrodes placed in an electrolyte. After exposing it to light, energy increased. Willoughby Smith first described the “Effect of Light on Selenium during the passage of Electric Current” in an article,  first published in the February 1873 issue of Nature. It was six years before the first solid state photovoltaic cell was made by Charles Fritts. Fritts coated the semiconductor selenium with a thin layer of gold to form the junctions. This device was only around 1% efficient. It was the first to demonstrate that solid material with no moving parts could be used to convert sunlight directly into electrical energy.

The pursuit of the increase to photovoltaic efficiency 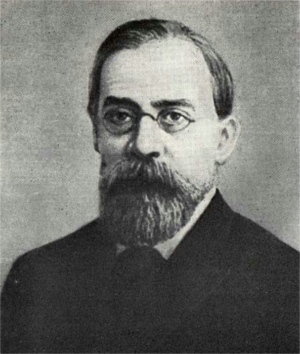 Since the above discovery, scientists’ main goal has been to increase the efficiency of pv cells. Starting in 1888 with a Russian physicist called Aleksandr Stoletov (left). He built the first photoelectric cell based on the outer photoelectric effect. The effect was discovered by Heinrich Hertz earlier in 1887. In the Photoelectric effect, electrons are released from solids, liquids or gases when they absorb energy from light. It was discovered that ultraviolet rays can cause a spark to jump between two electrodes. This led to the creation of the solar heater unit in 1891.

Albert Einstein published a paper on this photoelectric effect and the underlying mechanism of light instigated carrier excitation in 1905. For this, he won the Nobel Prize in physics in 1921. Possibly in response to Einstein’s paper, William J. Bailey invented the Copper Collector in 1908. The collector improved the efficiency of the original collector method, simply by using copper insulation. The improvements achieved by this method are still being used in today’s equipment.  It was, however, Russell Ohl who patented the modern junction semiconductor solar cell in 1946.

Solar panels in the modern era

By the year 1953 the study of Global Warming was hitting the press. Both Time magazine and Popular Mechanics ran articles on the subject. People were starting to become aware of the depletion of fossil fuels. There was now a need for a more renewable energy source. The first practical photovoltaic cell was developed in 1954 at Bell Laboratories by Daryl Chaplin, Gerald Pearson and Calvin Souther Fuller. A couple of years later and the U.S Signal Corps Laboratories were developing photovoltaic cells for Earth orbiting satellites. It led to the solar array on the Vanguard 1 space mission. With further developments, solar power became the accepted energy source for space application and remains so today.

The commercialisation of solar power

A company called Hoffman Electronics managed to increase efficiency to 14%. Advances led to various attempts to commercialise solar photovoltaics in the 1950s and 60s. There was little success. The price of achieving a watt of power dropped hugely in the 1970s, leading to the unit’s application in remote locations where grid connected utilities could not exist affordably.

By 1980 solar panel power plants were built with ARCO solar, producing more than 1 megawatt of photovoltaic modules a year. The company helped set up the first megawatt-scale power station in Hisperia, California. That year construction on a U.S. Department of Energy project named Solar One was finished. Solar One produced 10 megawatts of current, guiding the sun’s energy into a common focal point to produce heat. The heat ran a steam turbine generator. It did so using 1818 mirrors, each mirror being 40m2 (430 ft2) with a total area of 72,650 m2.  By 1985 sales of photovoltaic cells had reached $250,000,000. The University of South Wales had increased the efficiency for silicone solar cells to 20%. This was under 1-sun conditions. A year later ARCO released the first commercially available thin-film solar power module.

In 1994 The National Renewable Energy Lab in America developed a solar cell. The cell was made from gallium indium phosphide and gallium arsenide. It breaks the 30% efficient mark, meaning that it converts 30% of the sun’s light that strikes it into usable power. A skyscraper in New York City (right) used these new higher efficiency thin cells on a selection of its floors. They helped to meet the buildings energy needs a few years later.

We now reach the year 2000. Construction of solar panels at the largest plant reached a production capacity of 100 megawatts of power a year. Solar power had become big business for producers and sellers the world over. People worldwide, especially those in leadership roles were becoming increasingly aware of the need to lower our dependence on fossil fuels. More eco-friendly means of powering our lives needed to be found. Scientific endeavour in the renewable energy industry was increasing greatly. Solar power was the flagship technology.

At the turn of the century, large domestic and commercial solar initiatives were in play. In 2004, Governor Arnold Schwarzenegger proposed a scheme for 1 million solar roofs.  Germany and other nations had developed a highly successful domestic solar PV market. 2006 saw widespread news coverage. This was due to several major high street electrical retailers’ decision to stock solar PV modules. They also offered an install service which started the ball rolling here in the UK. Now we are all familiar with solar photovoltaic arrays. We can see them on the roofs of the buildings around us. At the end of 2011 there were 230,000 solar power projects in the United Kingdom. 4 million homes across the UK will be fully or partially powered by the sun within eight years. This is based on government predictions – all thanks to technological developments, helped by the fact that we have an insolation level like that of Germany. Insolation level is short for incident or incoming solar radiation. Germany is, and has been, by far the biggest market for domestic photovoltaics. The country currently has more than one third capacity installed.  Nonetheless, solar energy remains an underused resource in the United Kingdom. The UK still gets the majority of its energy from expensive and harmful fossil fuels such as gas and coal.

In the past years we have seen enormous investment in utility-scale solar power plants.  Records for the largest are often broken. The largest solar energy plant now is the Golmud Solar Energy plant in China. The plant has an installed capacity of 200 megawatts. A solar project in India called Gujarat Solar Park, a collection of separate solar farms, boasts a combined installed capacity of 605 megawatts.

You can read up to date news about solar technology in our renewable energy blog. We also have a section on future solar PV developments.

One Reply to “History of Solar PV”